New Moons upon us. A good time to be a Scorpio I suppose. Despite the rabbit holes and false summits of 2020...the crushing acceptance that humanity is split down the middle and sideways; that some of the most doom and gloom social forecasts were spot-on...what can you pull from it? 2020 is all about revolution whether you like it or not. Hail Pluto. It's his year.

I'm reminded that the world Apocalypse simply means "An Unveiling", Occult just means "hidden" and that Enlightenment can be a profoundly destructive process. Bitterness wanes as I've done well to appreciate its angles through the year. Mostly, I've come to acknowledge the impermanence of all things, including myself-not because I just turned 41, but because we now live in a sort of augmented fantasy (many, not all) wherein ideas are implicit across international boundaries and real-time social engineering isn't rumor but a well-oiled and time-tested machine with plenty a sub-plot. It's not as if social engineering is new; on the contrary-but it's more efficient than ever. And yet I suspect a sort of breakaway scenario unfolding within a great many people. Some people are still human. I've always written about technology and where it's leading us and other inert forces waiting for humans to chance upon and adopt. Alone, they are nothing. As tools they are treasures. As weapons, they are just as deadly as any other object in the wrong hands.

I haven't written-not because there aren't words and perspectives teeming and tipping from my head and heart. I haven't written because there hasn't been an authentic stream to paddle down. In 2018-19 my life was dominated by change wherein the fundamental energies that I subscribed to were traded, upgraded, cast aside, and re-acquainted on better terms. Change of that caliber demands attention and in that vein, an authentic path split off from all former paths which lead from Mexico to Canada on the Pacific Crest Trail...then over to Switzerland where I married and continued walking and digging at length to uncover just what my life had been and why it had suddenly diverged from all known roads with such undeniable synchronicity.

And then I was back in Flagstaff after 16 years, nestled in a cozy wooden home next to the mountains where the smell of the pines greeted me in the morning. Two weeks of respite before the world pretended (yet again) to be surprised by its own shadow. At least that's how I saw it. Friends and family that had come closer than ever through tribulation and the experience engendered and nurtured on the trail were suddenly combative, incommunicado, and brimming with every sort of Freudian conjecture I could shake a stick at. It was suddenly I, the bearded songwriter who'd taken great pride at reflexively opposing war and predatory capitalism and was well-acquainted with the taste of pepper spray who was on the defensive. My crime? Humor. My worst offense? Disagreeing. Dissent. Critical thought. Pause. Analysis. Not doing what I was told simply because everyone else was doing it. I'd wrongly assumed this was still a value. Mostly, I'm a peace-maker. A diplomat. A systems-approacher who enjoys watching humans interact harmoniously in their given environment. I enjoy watching the effortless nature in which solutions present themselves on time. I've tried to laud the idea of "Trust". That the logos more effectively speaks its timeless poem when we're quiet enough to read. I also have no problem watching rotten bridges burn.

But for my words I'm considered by some to be...something. God knows what.  It is my words that cause fury and much hand-wringing and wailing and gnashing of teeth among the women and infants. Why? Because words are powerful and when you use them to tell the truth the first thing that happens INVARIABLY is that someone violently disagrees with you, levels the usual ad-hominems from a safe online distance, and skulks like a common coward among the flock, murmuring things here and there. My answer? "Have fun."

I'm a human who enjoyed the omnipresent near-absence of four fathers by the time I was fourteen. Everything has been auto-didactic. Every struggle, every achievement, and every failure leaves a distinct taste and stain. Why? Because I know I cooked it; crafted it with my own two hands. I own it like some people own money and because of this I can look deeply into the eyes of my detractors and ask "...what do you  know about any part of me?"

I haven't written because if I can't bleed onto the paper than it mustn't be too important (according to a certain author) I blogged consistently for over a year, detailing the strange subjective nature of life on the trail. It was as if I were writing myself into some sort of story...the words pulsing on the page with lives of their own. I'd taken up study into these ideas for years. What stories are we ultimately crafting? What role do these 'spellings' actually play for us? I could neither deny or apprehend their character or meaning. I only knew that things were resonating into place in such a way that I could finally trust-after living a life built on a mountain of mistrust.

I couldn't explain how I ended up in Interlaken one afternoon, having climbed vertically up Harder-Kulm under a languid summer fog, and found myself parallel to the very scene I'd hung on my wall less than a year before. I hadn't even conceived of a thru-hike then. It was later on the descent that I proposed to Hanne.

I haven't written because the world has changed and I haven't. There's nothing intrinsically new here. My primary work has been peeling off the layers to reveal, not to add another 'skill-set'. I know people will almost no practical skills at all who are healthy, happy, great parents, friends, and leaders. I don't trust skill-sets as much as I used to. They're only helpful of you can see the forest for the trees. I've become much more of a Taoist. "What can I get rid of here?" Lies? Bullshit? Incongruent nonsense? Sure. What have you got to lose? Plenty. But you'll arrive and you'll be lighter still.

And I haven't written much because I've been working my ever-loving-ass off. Because we're still planning the AZT in the small pockets of free time that life allows. I want to reach out. I want to say so many things to so many people. I want to put my hands on the shoulders of the world and tell them another story. In time. As they say "Propaganda is always louder than truth...and everyone believes it at first." Funny. No matter how many documentaries and books nearly saturating us with any number of lessons about the 20th Century: Not a thing changes and no more than a faint whisper of incredulity...

But we have done and seen much this year. Lots of sunlight. Winter tans. Loads of research. Saving. Stocking. Appraisals. Re-appraisals. Gift-giving. List-making. Fire-cooking.

The best moments are still the ones that make me question my sanity. Staring down thousands of feet into a South Kaibab abyss. Waking up at 5 am to rifle shots next to our tent. "Sorry, we didn't see you! We're the youth elk hunting club!" Summiting Humphreys on a Saturday and Mt Wilson the next just to take pictures from each precipice. Cycling to snowbowl from town with a backpack full of hiking gear, stowing the bike and spandex behind the lockers, climbing the peak, and cycling back down. The level of exhaustion. A vital exhaustion...the kind that bypasses everything. The kind that returns you to a primitive animal and leaves you knowing that it was never about the top of the peak.

The best moments are the ones where I look over at the picture of my mom on the shelf. Still smiling. Three sips into an IPA on a Friday night. Learning the only reliable ways to cook edible pizza in our fireplace. Waking up to find Hanne's Happy Birthday strung in letters across the dining room with a miniature cardboard camera. I pull back a little flap and inside are donations from friends and family to help me purchase a real landscape lens for the D7100. Finally. It's barely 7am and I'm trying to hold back tears. No...this is what it's always been about. This is what it will always be about. 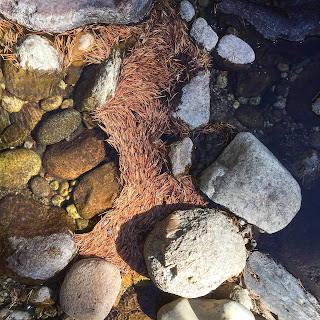